As the word suggests, magical Realism is an art and literary genre in which magic interpenetrates reality. The term was coined by Franz Roh, a German photographer and art historian, in 1925. Oil painting reproductions that reject Realism and individual subjectivity and replace them with dreamlike fantasies, obscure interpretations, and juxtaposition of alien ideas can be described as Magical Realism.

The movement of Magical Realism ran parallel with Neue Sachlichkeit, a German term for New Objectivity. It was inspired by European surrealism and neo-romanticism in France and emerged primarily to rebel against avant-garde art, which popularized after World War I.

Let us now explore some dreamlike examples of this unusual and intriguing movement!

Painted in 1931, “Late Visitors to Pompeii” aims to blend two different timelines to create Willink’s “imaginary realism.” In this uncanny painting, Willink depicts Pompeii, a once-thriving Roman city, just before it fell to ruins after the disastrous eruption of Mount Vesuvius in 79 A.D.

Four men stand amidst the fallen city, wearing tuxedos that date them to the Weimar era, whereas the erupting volcano in the background belongs to the long-gone past. The incoherence in time and the mixing of the past with the present creates a puzzling theme.

Oil painting reproductions may hint towards modern society and its growing obsession with isolation and detachment. It might also attempt to alert the people of the past calamities and the present catastrophes that they remain unmindful of.

The Two Fridas by Frida Kahlo

“The Two Fridas,” painted by Mexican painter Frida Kahlo in 1939, illustrates the longing and loneliness of Kahlo after her divorce from Diego Rivera. The artwork is a double self-portrait with the two Fridas seated while holding hands, as agitated clouds fill the background.

The Frida on the left has a broken heart, which drips blood on her traditional Victorian wedding dress. This Frida represents the wounded, broken version from the past. Her connection is through an artery. It originates from the childhood portrait of Rivera that the Frida on the right holds. This Frida dressed in Tehuana attire that was loved by Rivera, with her heart intact.

The portrait represents the anguish of being caught between present and past where one Frida yearns for her lost love, the other clamps down the vein that feeds that longing with a surgical pincer.

The Portrait of Dr. Haustein by Christian Schad

Created in Berlin in 1928 by the German painter Christian Schad, “The Portrait of Dr. Haustein” held a vehemently terrible fate for its subject. This painting was inspired by the New Objectivity genre and featured Dr. Haustein, a Jewish dermatologist specializing in treating prostitutes with syphilis.

In the artwork, Schad has painted Han Haustein in a dark palette while sitting casually on a chair with an instrument held against his chest. A grim, eerie shadow lurks behind him on the wall, smoking. This figure is said to be Han’s mistress, Sonja, giving off an ominous vibe. Exasperated by her husband’s infidelities, Han’s wife, Friedel, committed suicide. Hans took his own life after being arrested by the Nazi secret police in 1933.

Ivan took a great leap and chose to depict Ida Rogers, a teenager, aged, wrinkled and misshapen. This American illustrator took the sufferings he experienced in the medical corps during World War I and poured them into his artworks. Recognized as the “master of the macabre,” he was determined to depict even the most microscopic details of his subjects and revealed them in the dark subject matter.

Ida’s dress is bawdy and revealing, and her gaze is sad and distressed. She looks at her drooping flesh and attempts to powder away from her old age. Loose strands of hair fall from her comb, and the dressing room carpet is worn out, just like her. Even the precarious positions of her possessions suggest the fragile nature of her existence.

Without Hope by Frida Kahlo

Frida Kahlo painted “Without Hope” in 1945 when she was bedridden due to her many injuries and severe illness. To treat malnourishment, her doctors prescribed her a strict diet regime that she had to follow. The easel holding a large funnel transported the disgusting food into her mouth.

The food is in the form of microscopic organisms, skulls, and animals. Frida herself is tucked under the covers, naked and helpless. The landscape behind depicts both the sun and the moon. It also tells the saga of her sickness that she had to endure night and day.

Magical Realism became a trend that transcended reality with magic and imagination. So take a break from the monotonous reality and plummet into the ingenious world of an imaginary haven! Some of this genre’s fascinating oil painting reproductions have a home at the 1st Art Gallery, the world’s largest supplier of fine art reproductions and hand-painted portraits. 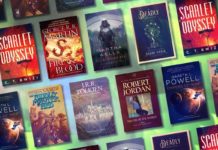